We are given a linux binary. To start off, lets run checksec on it:

It looks like NX is disabled, so if needed, we can place and execute shell code from the stack. To understand how this binary works, I opened it with Ghidra. There are only two functions, _entry and _exit. Let's look at _entry first. Although the decompilation is mostly useless, the disassembly is more than enough. 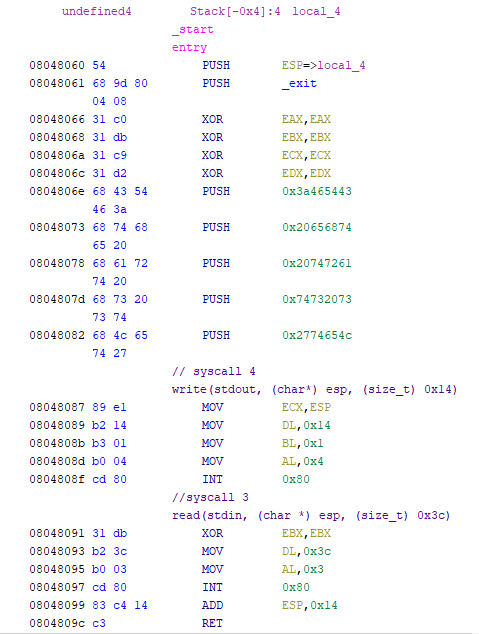 We can see two int 0x80s that are syscalls. Looking at the value of eax and by referencing a 32-bit syscall table, we can identify them. The reversed syscalls are shown in comments in the above screenshot. It's also clear that we control EIP due to the large read syscall that will overflow into the save return address on the stack.

As we saw earlier, the NX bit is disabled, so we can jump to our shellcode. To do so, we need to leak a stack address to identify where to jump to. Using pwndbg, it's easy to watch the stack during execution.

I'll use pwntools to ease communications with the binary.

This gives us a shell, and if we explore the server, we will find the flag in /home/start/flag.